MENTION crab, and Singaporeans will think of it on a plate smothered in chilli sauce.

But local scientists are now fighting to save a crab, barely larger than a 50-cent coin, found nowhere else in the world but here.

Numbers of the Singapore freshwater crab have declined drastically, they have found, though its exact population is unknown.

The International Union for the Conservation of Nature has listed it as critically endangered, and considers it one of the 100 most threatened species in the world. It is found only in several isolated forest streams in Bukit Timah, Bukit Batok and Bukit Gombak.

A two-year study begun last July to assess its numbers and habitat conditions is under way, spearheaded by the National Parks Board and the National University of Singapore (NUS).

Every month, NUS ecologist Darren Yeo tramps into the dense forests to search for the tiny crustaceans.

It is no easy task, he said. The nocturnal crabs tend to find shelter under rocks on the stream bed, feeding on worms.

But he has drawn one important observation from his strenuous work: populations of the crab in the Bukit Timah Nature Reserve appear to have plummeted.

Scientists are unsure why. “One possible reason could be changes in water quality, caused perhaps by acid rain. But we haven’t drawn a link,” he said.

One indicator of water quality is the pH scale, which measures how acidic or alkaline water is. Pure water has a neutral pH of seven and pH falls as water gets more acidic.

The crab is known to prefer fast-flowing streams with a near- neutral pH concentration, as it evolved in relatively pristine conditions.

But the impact of urbanisation and pollutants may have altered the pH of its habitats, said wildlife consultant Subaraj Rajathurai.

While few Singaporeans may know or care about the little crab, they should consider its rarity, said NUS crab expert Peter Ng, who named the species in 1986.

“This animal is uniquely Singaporean, to use the Singapore Tourism Board’s words,” said the director of the Tropical Marine Science Institute.

“It evolved in Singapore in isolation. There are not many like it. Ninety-nine per cent of species found here are also found elsewhere in the region.”

There are several other species unique to Singapore, including the Swamp forest crab found only in Nee Soon swamp forest, and the Johnson’s freshwater crab found in the Central Catchment Nature Reserve.

Introducing it into new habitats is another option, said Prof Yeo.

Both urged people not to disturb the crabs or their habitats.

Professor Ng acknowledged that it was unlikely for people to get excited over such a small animal. “But by trying to save it, it says a lot to the world about who we are as a people, a nation. We don’t have to do it, but we should.” 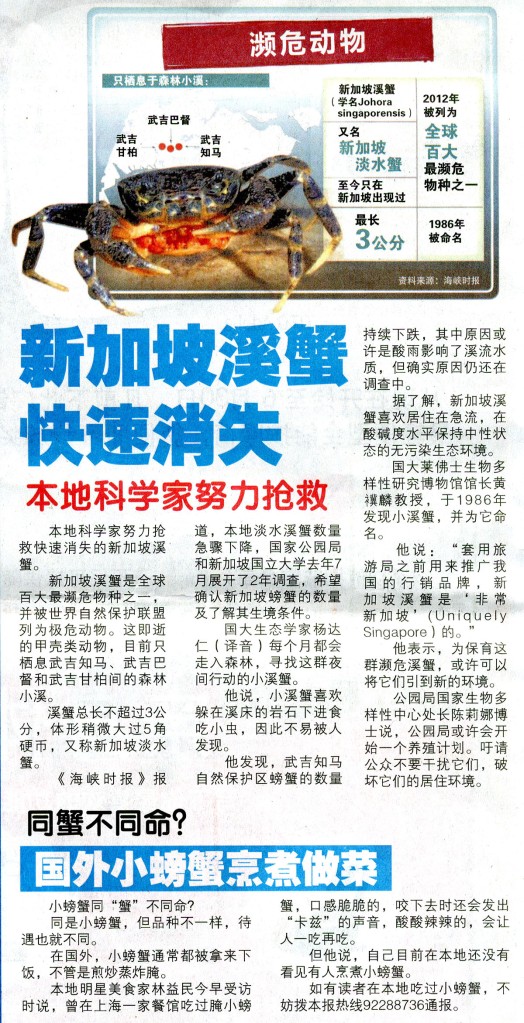