Professor Navjot Sodhi passed away on the 12th of June 2011. He is survived by his wife and two children.

The team at RMBR extends our deepest condolences to his family and loved ones.

“Dear Faculty, Staff, and Students,
It is with deep sadness that I inform you of the death of Professor Navjot Sodhi. Navjot underwent surgery a little over a week ago for a cancer that was recently diagnosed. He remained in the ICU where he passed away last night (June 12) at 6:30 PM. He was a leader in ecology and conservation biology and was a great contributor to his field, mentor to his students and postdocs, and colleague to the DBS faculty. We extend our heartfelt condolences to his wife, Charanjit, and children, Ada and Darwin.”  –  Professor Paul Matsudaira (Head, Department of Biological Sciences)

Professor Peter Ng, director of RMBR  and Professor Lam Toong Jin, Emeritus Professor and former Head of DBS, both close colleagues and friends of Prof Sodhi expressed their shock and were deeply saddened by the news.

Professor Sodhi’s passing has left a gaping hole in the conservation biology fraternity, not only in Singapore, but world wide. Over the last 13 years, he has left a legacy of over 100 scientific papers in international and regional scientific journals such as Nature, Science, Trends in Ecology and Evolution, Annual Review of Ecology, Evolution and Systematics, Auk, Current Biology, BioScience, Ecological Applications, Journal of Applied Ecology,Conservation Biology, Biological Conservation, and Biodiversity and Conservation. He has also written and/or edited several books and monographs. One of his latest and most monumental textbook, Conservation Biology for All, edited with Paul Ehrlich, is free and widely available online, a testament to his generosity in sharing his knowledge and conservation cause with everyone and anyone.

Rest In Peace, Navjot. You will be missed.

Tributes from Corey Bradshow, a close friend and collaborator and from the Biodiversity Crew @ NUS. 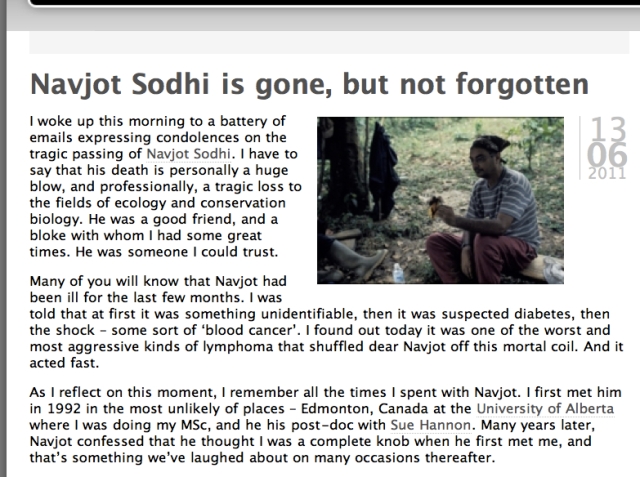 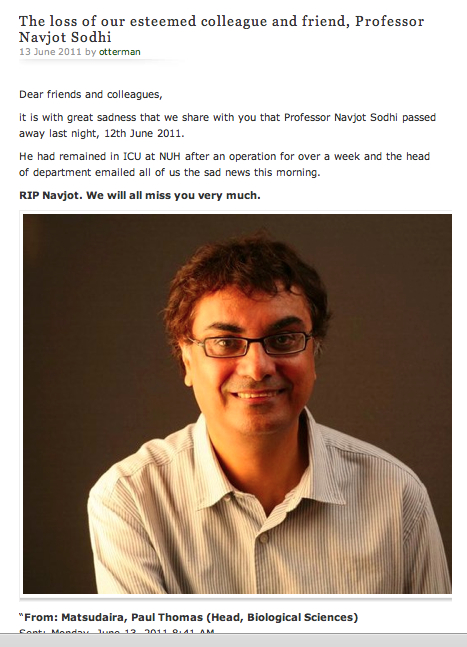 This entry was posted in Announcement, people. Bookmark the permalink.